Travelin' Soldier by The Dixie Chicks 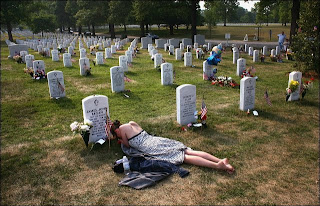 "Travelin’ Soldier" live performance
Many people take the opportunity on this memorial day weekend to go on vacation, have barbeques and spend time with family. Memorial day also marks the end of the school year providing a feeling of freedom for children (and teachers) all across America. With all of this excitement, sometimes it’s easy to overlook the point of Memorial day.

Celebrated near the day of reunification after the Civil War, Memorial Day originally honored Union soldiers who had died in the America Civil War. After World War I, the American government changed the day to include all Americans who died in war or military action.

How do we honor all those have made the ultimate sacrifice? When I think of the magnitude of loss, it’s too much for me to comprehend. In World War II, we lost around 290,000, in Vietnam, 47,000 and in our current war in Iraq, we have lost 4,250 as of April 30, 2009. I have issues imagining what 4,250 people look like in as a crowd let alone 290,000. I don’t even have a chance of relating to the emotional power of this kind of loss when I have issues with simply picturing that many people.

Human understanding does not lie in groups but in individual connection and its through the stories of individuals, that we can get a sense of what this all means to who we are as a people. Often the stories that we hear about veterans are the heroic tales of soldiers who win purple hearts. The story is about a different kind of hero. It’s about a teenage girl, a chance encounter and the love of a traveling soldier.

Bruce Robison wrote and recorded “Travelin’ Soldier” in 1996. Ty England also recorded this song in 1999 but it was the Dixie Chick version off their 2002 album Home that became a hit. Home, their third album with lead singer Natalie Maines (sixth album as the Dixie Chicks) displayed a musical maturity not heard on their previous albums. The Dixie Chicks contrasted Home from their previous two albums fusing their pop sensibility with a more acoustic bluegrass sound, which is most notably heard on their second single “Long Time Gone.”

“Travelin’ Soldier” is the story of a teenage girl meets a soldier while working at a café. The girl notices he is a little shy, so she smiles at him and he asks if she has some time to talk. The soldier tells her that he doesn’t have anyone to write to and asks if he can write a letter to him. We don’t hear the girls response, instead the chorus flashes forward to a time when the girl has fallen in love with him.

The chorus is a simple but powerful description of teenage love. The first two words of the chorus “I cried” are followed by a declaration of commitment saying that she will never hold the hand of another guy. She states that their love will never end as she waits for him to come back. The chorus ends “never more to be alone when the letter said ‘A soldier coming home.’” With this notification that the soldier is coming home the melody descends and the instruments seem to pull into themselves like a shallow breath, foreshadow the end of the story.

The next verse follows the soldier’s letters and his commitment to her. He writes all the way from Vietnams and reminisces about the time they had together. He tells her of his heart and how “it might be love.” Even within the dire situation of war, this soldier is thinking of love and what it means.

The last verse is set at a football game. As part of the opening ceremonies, an announcer reads of a list of local Vietnam dead. As the rest of the crowd seems to move on with the game, the girl, a piccolo player in the marching band cries alone under the stands.

Her hopes were high. She found companionship in the soldier, in his letters and the promise of him coming home. In the eyes of a teenager, this means the world, and the loss of her soldier was not only a loss of companion and a love but loss of hope.

Often when we hear stories of teenage love, they sound trite, but Natalie Maines takes this story seriously. Maines scales back her voice, drawing in the listener as she carefully paints the lyrics with the colors in her voice.

The Dixie Chicks, set up the last chorus, pulling the instruments down to a moment of silence in the last verse behind the words “Vietnam dead.” After this silence, Maines enters on the word “crying.” She sounds almost angry when she sings about no one else caring, like she’s screaming at everyone to look at the girl, to feel her loss and to acknowledge what has been lost.

Part of me feels like I want to shake up our country and remind everyone the point of Memorial Day, but maybe it’s in enjoying, truly cherishing the freedoms in our lives that we honor those who have made the ultimate sacrifice. Maybe it's enough, maybe it's not. And taking a moment to think about this leads us to the meaning of this day.

"I have never been able to think of the day as one of mourning; I have never quite been able to feel that half-masted flags were appropriate on Decoration Day. I have rather felt that the flag should be at the peak, because those whose dying we commemorate rejoiced in seeing it where their valor placed it. We honor them in a joyous, thankful, triumphant commemoration of what they did."
~Benjamin Harrison
Posted by Kingsley Tang at 9:38 AM